The sequel to Gacha Life also available for Windows 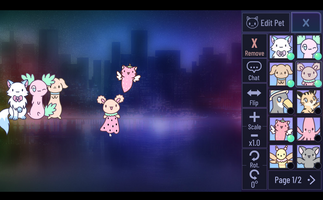 Advertisement
Gacha Club for Windows is a casual game that lets you create and customize a bunch of different characters in a way that's never been seen before for smartphones and PCs. This is the sequel to the super entertaining Gacha Life which includes a battle mode where you can fight your enemies with more than 180 possible units.

In this Windows version, you also have absolute control over the creation of your characters using the incredible editor that gives you enormous freedom. You can customize your character's skin tone, face shape, hair, eyes, facial expression, etc. The level of detail is incredible, and that's not even taking into account the different clothes and accessories you can choose from. But that's not all, there are also pets and more than 600 different poses available.

The Studio mode lets you create scenes with up to ten different characters, so unleash your creativity to its highest potential. Add a dialogue, objects, and pets. You can also choose from a huge variety of stage backgrounds. But without a doubt, the best thing about Gacha Club is that you can introduce a Narrator that allows you to create different scenes as if you were in front of a comic book starring your heroes.

The game also features four different battle modes where you get to fight against hordes of enemies to the beat of the music. The story mode in Gacha Club reunites you with well-known characters, as well as new ones that introduce you to the world of DJing in this fun title.

Gacha Club is a fantastic game full of possibilities that lets you create characters from scratch, customize existing ones to your liking, create scenes with them, or fight using the different modes available. Plus, it includes several mini-games where you can continue to enjoy the protagonists' adventures. We're talking about a game that you can enjoy offline and where all the editing elements are totally free.
Reviewed by Carlos Martínez

Gacha Club is a free game, but you can still donate to its developers directly from its official website.
Advertisement

Why is this app published on Uptodown?
(More information)

UwU I love this game

i don;t know how to put this in my computer

for a strange reason the game does not work on my Windows 10: ( nwhen I switch to Windows 11 I will download the game again but I have played it on my iPad and it is very good: D !!

The game is even very good but I would like it to be updated since it has not been done for about a year, also there are more things missing such as some fringes, clothes, shoes or accessories which i...

I really like the App I highly recommend it 100 / I recommend it; and although I would like it to change the version since in Windows you cannot change the rest 5 stars xd xd Bad Piggies
The pigs from Angry Birds get their time in the spotlight.
osu!
Keep the beat as the songs play
Chuzzle Deluxe
Connect 3 or more plushes of the same color
Candy Crush Saga (GameLoop)
Now you can match up candies on PC, too
NullpoMino
All the flavour of classic Tetris
Luxor 3
Don't let the balls kill you
Kyodai Mahjongg 2006
Do you like solitaire and puzzles? Don't look any further
Farm Frenzy - Pizza Party!
Take care of your animals, feed them and... cook pizzas!

Warzone 2100
Futuristic war strategy in real time
Playnite
Merge your game libraries and platforms into a single tool
GeForce Experience
Improve your computer games performance
IMVU
It arrives the revolution of instant messaging
LaunchBox
An elegant frontend for all your games
MAME
The most popular arcade emulator
MameUI64
All the power of MAME, now with an intuitive interface
ClrMamePro
Update Mame Roms without a problem